Repartee’s music has been described as ‘the kind of music that allows you to let loose while dancing, without giving a fuck about how foolish you look’ (the Muse). They play keyboard-based pop with elements of gritty rock. In a short period of time they’ve commanded a devoted following in St. John’s through their dynamic live show. It’s that sort of buzz that led to them receiving a MusicNL Professional Demo Grant to make their first EP, ‘Lost Like We All Are’. They’ve shared the stage with such notable acts as Hey Rosetta, Rich Aucoin, Michou, Peter Elkas, Gramercy Riffs, Mark Bragg, Pathological Lovers and Matthew Hornell and the Diamond Minds. Most recently they were voted Best New Band by readers of The Scope, as well as the Newfoundland Herald’s Band to Watch for 2011. They're showcased several times at the 2011 ECMAs in Charlottetown, and are currently in the process of recording their debut full-length album to be released this year. Poignant, honest lyrics that somehow sit perfectly in catchy, danceable pop – Repartee signal a shift in Newfoundland music. 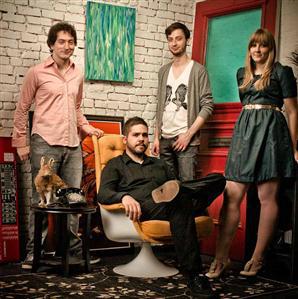