Gladstone High School, 1967: Basil Watson, who was playing keyboards with The Coastmen at the time, met Ed Coppard, who was playing keyboards with The Shockers. While both were popular local bands at that time, the following year they decided to make a break and together formed the psych rock band Trilogy. They played local clubs like The Daisy and Oil Can Harry's and opened for Billy Preston in Vancouver at the Marco Polo dinner club in '69. They also played on the Vox Dragster for the Vancouver PNE parade that same year.

Trilogy recorded this lone single in North Vancouver at PBS studios. Basil writes: "I think what happened is Ed and Bill and I did the bed tracks and vocals and later Eddy Patterson added guitar and Dave Jonsson (Shockers) and co-writer redid the drums. Hope I got that all right. Later in 1969 We were looking to add guitar to the band and were auditioning players. Two fellows that showed up together were Brett Wade and Gary Bell. When they were leaving they got my number and phoned me up to start a band. I left Trilogy and we started Stallion Thumrock." Dave: "yes. Yah, I'm on drums. Funny, I did it originally, then, when they had their tech more together, they wanted to re-record the drums. I was out of town so they got Kat in. When I got back they had me come back and OD on top of Kat!" 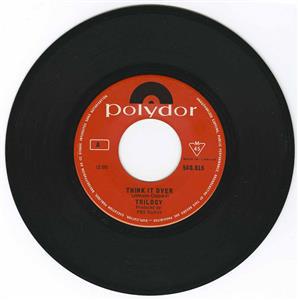