No Gold are three men from Vancouver that make their own brand of laid back pop pulling from dance, ambient, free form, and kraut styles.

Beginning with an extended squall of noise a la Faust on “Rainforce,” this Vancouver trio then moves into layers of minimalist groove and skittish guitars on “Rainforts” that hearken back to Manscape-era Wire. Whether favouring Eno-like swashes of sound and disjointed time signatures on the lengthy “Council Jam” or a heatbeat-like bubbly dub vibe on “We/Be/Do,” everything is meticulously crafted and spurred on by by both an urge to dance and to deconstruct. A Polaris-prize contender for sure. Grade: A-
-theprovince

Vancouver trio No Gold is often associated with sweaty Peanut Gallery shows, all night wilderness dance parties, or their 2009 7” Miami. And from an outside perspective, 2010 has been a quiet year for the band (Jack Jutson, Ian Wyatt and Liam Butler). Behind the scenes, they’ve been busy at work, honing and recording a new sound with Ian Wyatt replacing Haley Pearse on drums. Their debut self-titled LP will be officially released by Unfamiliar Records on February 22, with a release show on February 19 at the Waldorf and a showcase at SXSW.

No Gold signed to Unfamiliar Records over two years ago but haven’t had anything for them to release until now. “This album was supposed to come out a while ago, or at least (that was) the expectation. And there are definitely excuses around that we could use but we didn’t do it,” Butler elaborates during a sit down at their studio. “We kind of got stuck in a rut.” But the delay paid off and No Gold has put forward a stellar debut LP. Describing the transition, Jutson says, “We took a six-month hiatus from live shows right around the time that Ian joined and had to learn how to just play. Not like, ‘Aw shit we got a show, better get together and practice,’ but a whole extension of making it your day job. Going in just to play without any idea, goal or song …that was what informed this album and what No Gold is now.”

Recorded over the summer in their Chinatown studio, the album was self-produced and engineered on equipment loaned from Jay Arnet (Fine Mist) who also mastered the record. Wyatt, who took the production reins, previously played in Vancouver art-noise outfit Robe & Allied for which he recorded a 7” and 12”. The band split up and neither was released, but Wyatt gained valuable experience tracking a band (prior to this he had been mostly making electronic music).

“That was actually how we started hanging out,” explains Wyatt. “There was already talk about doing a record and at that time they were still playing with Haley. I was just excited to work with them. I loved their band and had been promoting shows and booked them a couple of times.” They became friends, began playing music together and eventually met somewhere in the middle.

To say that Wyatt’s background in electronic music had an impact on No Gold’s new sound would be a gross understatement. Miami was straight bass, drums, guitar, but in the last year they began using samplers, synthesizers and pre-programmed loops on the drums. “It feels kind of limitless with the things you can do with that kind of gear,” says Jutson excitedly. “And we’re just getting started with it too.”

No Gold was written and recorded in an integrated process of exploring and capturing sounds, looping them and patching different parts together like quilting without a pattern. The result is a seamless record where ideas flow from one track to the next using a similar vocabulary of notes, creating mood moments and allowing the listener to maneuver between subversive and active consciousness. Although there’s a density to the arrangement, each of the layers achieves minimalism, as does the overall aesthetic. Listen closely, and you might catch the sound of a text notification or an odd seagull calling from the alley they overlook. “There’s power and matter being moved around the room vibrating and there’s something that I hear when I listen back (to the record),” Wyatt says. “That’s what I think is so exciting about music that’s been sampled for dance music for the last 30 or 40 years is that you can hear that there are people in a room doing something and there’s something happening there, the air around the note, the sound of the room, the sound of the people.” While recording, the band lived together grounded in a healthy routine of morning yoga, vocal warm-ups and drinking coffee over beer. They also swam at Templeton Pool as often as possible. Cover artist Nathalee Paolinelli now lives in Frankfurt, but was living in Vancouver when she painted the cover art for No Gold.

The album release party will take place on February 19 at the Waldorf and will feature DJ set by Hyenas (Basketball members performance by No Gold as well as Flash Palace, a young Vancouver band who, according to Jutson, are “the kind of band you wanna swear at for being so good”). In March, No Gold will set out for a west coast tour, culminating in a showcase performance with Basketball for Olio and Music Waste Festivals and SXSW in Austin. “We don’t have any huge expectations for that tour,” Jutson adds. “We’ll save that for later in the summer.”
-Sarah Westwood, beatroute 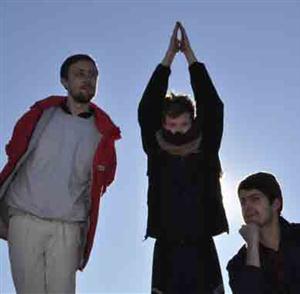