Mole City was formed when guitarist Chris Want, bassist Charles Andriashek, and drummer John Wilson realized that in order for their busking act to survive more than four months a year (a.k.a summer) on the streets of Edmonton, it had to move indoors – playing clubs.

So giving up busking in the mid nineties was a step in the right direction but they knew their unique sound was limited with just guitar, bass, and drums. Their tastes in music frequently diverged, as they each brought different musical influences to the table (The Beatles, Thelonious Monk, Ornette Coleman, Sex Pistols, Antonio Carlos Jobim, and the Lambrettas just to name a few). But there was one musical influence that they would always agree on: they shared a love for the incidental music from the sixties Spider-man cartoon. It would be this influence for which Mole City would become best known both locally and on the Internet (the band's name was taken from an episode of Spider-man - “Menace from the bottom of the World” in case you’re interested). To achieve anything close to that sound they needed horns.

They took out an ad in a local newspaper looking for a saxophone player and after a few false starts flutist Devon Rowe joined the band. Yeah, that’s right flutist… Devon’s solos, ranging from quiet lilts to ear busting trills were the ingredient the trio didn’t know it was looking for. After a few practices Devon brought along a fellow graduate student from the earth sciences department at the University of Alberta, saxophonist Mark “Skids” Skidmore. The addition of an accomplished sax player – what the boys were originally looking for - completed the set. Skids had fine chops, an easy going manner and fit right in – the trio was now a quintet.

We had a lot fun making this record and we sure hope there's still a few swingers out there who dig it. 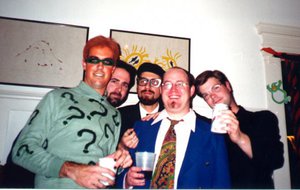 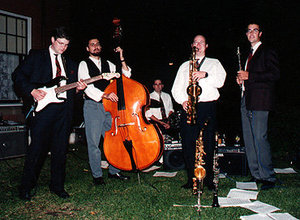