Jac Cornell played with the Boots, one of the best German beat groups of the era. They made two albums and several singles in Germany between 1964 and 1968. They played at the Star-Club in Hamburg at the same time Jimi Hendrix was there, and opened for The Beach Boys. Before their second LP, they recruited Jac Cornell Eckhardt, from The Hague, as their singer. He had been in several groups in Holland and Germany, billed as either Jack Eckhardt or Jackie Cornell. Jac was with The Boots from their second album as well as two following singles before the band brokeup. In 1968, Jac took three of the willing members to Holland to put together a new edition of The Boots. In 1969, the German members of The Boots returned to Germany and Jac took over stewardship of the group; hiring new members and signed a deal with Phillips. The group made three singles in 1968-69 before breaking up again. Jac went solo and recorded four singles as Jackie (or Jacky) Cornell for Decca and Polydor during 1970 and 1971. Jac says that the major problem facing artists at that time was being signed on the basis of their talent, then being forced to record whatever the producers wanted. While still in Holland, Jac made a single called “In The Beginning,” produced by Fred Haayen.

In 1973, he recorded the single for RCA Victor entitled Happy Dreamer (shown here is the American promo version), also released in Canada 1973 on RCA Victor. Jac notes: "The song Happy Dreamer was recorded at the RCA studio here in Toronto. The song is about a bird that used to come to my roof top garden where I lived in The Hague. It came to feed every morning and it was quite the sight to see especially with the mist coming from the canal below my apartment. When the summer ended it never returned and so I wrote the song. Never figured out what kind it exactly was. I thought it to be a little grey and blue dove." Happy Dreamer reached as high as #12 in RPM top 40 of 1973 and stayed in the top 40 charts for 24 weeks. It received an incredible amount of airplay in the US and Canada and reached #5 in Billboard Magazine, under Canadian Charts.

Jac also won a BMI Award 'Good to be by You'.

In the years to follow, he recorded a basket of other singles including "In the Park b/w Amsterdam" on RCA and in 1975 he produced his own recording for Warner entitled "Free Me b/w On My Way Out West". Jac currently owns Zee Grill, a famous, excellent, and successful restaurant in Toronto. There is also a plaque on Yorkville about the famous Riverboat. Jac’s name is prominent on the billboard!

On My Way Out West b/w Free Me 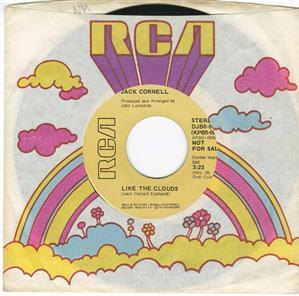