When Anna Ludlow plays, an energy fueled by passion builds. It’s written on her face, eyes closed, feeling the music flowing through her fiddle. Those watching her are drawn in, moved, changed. Pure joy.

Music is part of the texture of life in Nova Scotia. So when a child shows interest or talent in music it is often honoured with opportunity. Anna’s parents embraced her desire to develop her skills and acclaimed fiddler Kendra McGillivray, from Anna’s hometown of Antigonish, Nova Scotia, took on her instruction. In the years that followed Anna played a lot, at local pubs and parties, and in bands including Jug in Hand, KILT, Barnacle, and Banshee, feeling through the passion for music rising up in her soul. She loved the traditional tunes influencing her from nearby Celtic-music haven, Cape Breton. But other sounds were reaching her… blues, jazz, and more modern electronic beats seeped into her musical conscience. They all informed her musical growth and what immerged was a style all her own – something Anna calls Mainland Maritime Fiddle Fusion. It offers the raw energy of stripped-down tradition then makes it new and relevant with sounds that speak of more recent times and influences. And then she sings and the picture is complete. A style all Anna. Yes, there are many very talented female fiddlers on the scene, all with a flair of their own. But until you’ve seen Anna Ludlow, your experience is incomplete.

Anna’s talent has taken her beyond Nova Scotia’s rich music scene, to share stages with the likes of The Beach Boys, Blue Rodeo, Don Ross, and Ron Hynes. Endless offers to play private and corporate functions and to collaborate with other musicians in shows and on recordings speak to her versatility as a performer. As the principle fiddler for the Halifax, NS based hit show DRUM! Anna has performed in Dollywood, at the 2010 Winter Olympics, twice on Parliament Hill for Canada Day, and even for Queen Elizabeth II. But her local fans don’t really care about all that stuff… they just know they want to hear Anna because hearing her will make them feel good!

Anna’s recording Reel to Reel, released in 2009, was produced by herself and Dave Burton and was mixed and mastered at ECMA-winning Lakewind Sound Studios. Featuring the talents of Fred Lavery, Scott Macmillan, Dave MacIsaac, Wendy MacIsaac, David Burton and Jamie Gatti, the album received multiple award nominations. The CD showcases Anna’s talent as both fiddler and singer. Traditional in nature Anna wanted to honour the music that most influenced her musical development. Her much-anticipated follow-up recording will place even more emphasis on her unique style. 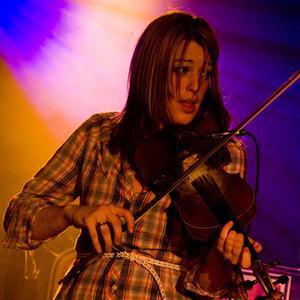