Both hailing from Scottish small towns in Canada, Brenley MacEachern and Lisa MacIsaac have chosen another musical path; one that channels their parent’s vintage record collection that comprised of the likes of Neil Young and Dolly Parton. Madison Violet came to be nearly 9 years ago after a chance meeting at an appropriately titled restaurant 'The Green Room'. Since that fateful meeting, the pair have come into a sound of their own, which has been described as both city-folk and tumbleweed pop.

With 2 recordings under their belt, both which were recorded in London, UK with producer John Reynolds (Sinead O'Connor, U2, Damien Dempsey) the pair have found themselves on the industry the radar. Guest appearances on their albums by Clare Kenny (Indigo Girls, Shakespear's Sister), Fiachna O'Braonain (Hothouse Flowers, Michelle Shocked) and Julian Wilson (Grand Drive) were a welcome addition to the mix. Their first release, Worry The Jury garnered a handful of ECMA award nominations ('Best New Group' and 'Pop Album of the Year') and had the industry opening their eyes wide at the emerging career that was destined to blossom. Caravan, their sophomore release, went towards a more alt-country direction, which garnered them 2 ECMA awards nominations in the 'Folk album of the Year' and 'Best Group Recording' categories as well as a Canadian Folk Award nomination as 'Vocal Group of the year'.

It's been nearly 3 years since their last recording session in London, and Madison Violet are about to release a new album, with a new direction and a new producer. This time, the duo have worked in their home and native land with producer Les Cooper at the helm. This new project has taken them down a road lush with harmonies, banjo, fiddle, mandolin and upright bass. The songs are infused with heartache and loss but the listener will always find an uplifting twang in their sound, one that may invoke the essence of Lucinda Williams or Steve Earle. The touring duo have been dubbed road dogs, as they spend 9 months a year on the road, supporting artists such as Ron Sexsmith, Chantal Kreviazuk, Indigo Girls and The Temptations in Australia, Switzerland, Germany, Denmark, Ireland, England, Wales, Scotland, Italy and of course, Canada. From the Montreux Jazz Festival to Massey Hall, audiences have swooned over their storytelling and songs.

No Fool for Trying

The Good in Goodbye 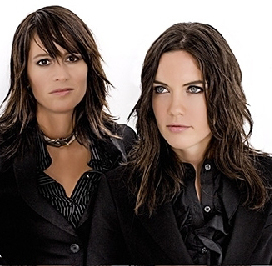