R. Dean Taylor was one of a small group of White singers and songwriters, who achieved success, during the late Sixties and early Seventies, at the Tamla Motown imprint.

He is best remembered for the singles ‘Indiana Wants Me’, Gotta See Jane’, and ‘There’s A Ghost In My House’, which were hugely successful during this era.

Born in Toronto in 1939, Richard’s career began in his hometown, when he played in several groups, as a pianist and singer, circa 1961.

A year later, he re-released the single, but this time for the Barry imprint.

1962 saw a follow up 45 entitled ‘I’ll Remember’ b/w ‘’It’s A Long Way To St. Louis’, which was released on Mala Records, also seeing a release on the Barry imprint for the Canadian market at the same time.

The single reached number 23 on a local Toronto based radio station,, was followed by another Barry 45, entitled ‘We Fell In Love As We Tangoed’ b/w ‘Beautiful Dreamer’, after which Richard decided to relocate to Detroit, Michigan to improve on his success.

Following the Detroit move in 1964, Richard was hired by Motown Records, mainly as a songwriter and recording artist for the Motown subsidiary V.I.P. label.

He had penned a debut 45 topical release, entitled ‘My Ladybug (Stay Away From That Beatle)’, however, the song remains unissued.

The song was penned by Richard and Brian Holland, with production chores provided by Brian Holland and Lamont Dozier.

‘Let’s Go Somewhere’ was mildly successful, however, his 1966 follow up, ‘There's A Ghost In My House’ received much greater interest.

The track was also penned by Holland–Dozier–Holland and Richard, and was also produced by Brian Holland and Lamont Dozier.

‘There's A Ghost In My House’ was later to reach number 3 in the United Kingdom charts in 1974.

His next V.I.P 45 was also a hit later down the line, entitled ‘Gotta See Jane’ b/w ‘Don’t Fool Around’, this track helped cement his reputation as a songwriter, which led to several of his songs being recorded by other Motown acts.

‘I’ll Turn to Stone’ by the Four Tops, and "All I Need" by The Temptations were both R. Dean Taylor co-written originals, and hits in the U.S. singles charts in 1967.

‘Gotta See Jane’ b/w ‘Back Street’, (the a-side co-written with Brian Holland), became a Top 20 hit in the U.K. following it’s re-release on the Rare Earth imprint in 1971.

By this time Richard had become a member of the Motown writing and production team known as ‘The Clan’.

Whilst the Corporation were penning hits for the Jackson 5, the Clan took over the generation of material for Diana Ross & the Supremes (following the departure of the Holland/Dozier/Holland team who left to set up Invictus Records).

In the States, the song reached number 5 on the Billboard Hot 100 chart, and at number 2 in the U.K.

Richard continued to write for artists at Rare Earth, until the label folded in 1976.

He released one 45 for the Farr imprint in 1976, entitled ‘We’ll Show Them All’ b/w ‘Magdalena’, however, Richard was not to chart again as a solo artist.

During the Eighties, he recorded some sides for the 20th Century and Strummer imprints.

In recent years, Richard has established his own record company, called Jane Records.

‘Indiana Wants Me’ was featured in the 1980 American movie, ‘The Ninth Configuration’.

I Think, Therefore I Am

I Think, Therefore I Am

At the High School Dance b/w How Wrong Can You Be?

At the High School Dance b/w How Wrong Can You Be?

There's A Ghost In my House b/w Let's Go Somewhere

Beautiful Dreamer b/w We Fell in Love as We Tangoed

At the High School Dance b/w How Wrong Can You Be? (re-issue)

It's a Long Way to St. Louis b/w I'll Remember 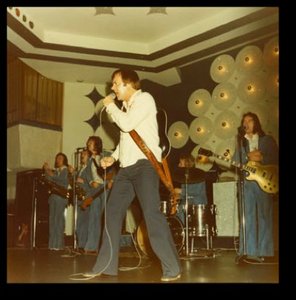