FOR MOCM - THE ROCKATONES BIOGRAPHY
Prepared by London Records Canada (1966)
The four amiable Montrealers who comprise the Rockatones are well on their way to becoming national stars with their current giant single. John Semeniuk, Len McFarlane, Steve Mitchell and Brian Headland, met in school five years ago and with a common interest in music formed the group. They started working local dance hops and private parties and found themselves getting more bookings more regularly throughout the area and further from home. In October 1963, having worked in and around Montreal steadily for two years, they recorded two instrumentals (Shandia & Submerge on Fontaine Records) and started becoming known further afield. They started working dances in the Ottawa – Cornwall district and their constant practicing was rewarded by their growing reputation and demand for bookings all through the southern part of Quebec and eastern Ontario.

Their big break came last spring with the recording of “I’M A MAN’”. Their first vocal, it was a wild success, reaching the Top Ten at number 9. It stayed on the chart for the rest of the summer and, during this time the Rockatones were in greater demand than before .Since two of the Rockatones were in school, public appearances had only been possible on weekends and now they were working Montreal, the Ottawa Valley and the American border areas constantly. Their appearance at Montreal’s Bonaventure Club drew thousands of teens and as many requests for their big number “I’M A MAN”.

Currently they are working as many local hops as they can manage with Johnny and Brian studying. All four lads are clean cut, quiet boys who feel that the main reason they have stayed together for so long is their ability to get along with one another so well. The five years have formed a close bond of friendship that is made even stronger by their joking and sarcasm amongst themselves, especially so when they are working out of town dances. They hope that this record will make the charts further west and this will be their first national hit for the start of even more hits. Once both boys finish school they hope that the group will have a chance to travel a great deal and work in many other countries as well as across Canada so that they can see and meet young people in their many different environments And now with this new great record “FOR MY OWN: b/w “EVERYTHINGS GONE WRONG” they anticipate the support of Canadians on the scene to make it a hit nationwide. Having appeared on Montreal television they look forward to other appearances in many Canadian cities in the coming months should their record receive the support and demand that it is getting all over Montreal.

LEN MCFARLANE
Plays drums. Works as a draftsman. Age 22 ( born December 11, 1943). Nickname Mack. Spends most of his time on his scooter or sleeping. Also likes flying and collecting anything and everything he sees large or small and useless. Favorite hobby is photography. Favorite artists are the guitarist Buck Owens and the Stones.

STEVE MITCHELL
Rhythm guitarist. Works in accounting. Age 22 (born January 5, 1944). Is the tallest of the group and interested in cars mainly. Hobbies include skiing and science fiction novels. Dislikes taxis and getting busy signals on the telephone but likes all kinds of food and the Stones and the Shadows.

BRIAN HEADLAND
Lead guitarist. 3rd year student at the Montreal Institute of Technology, studying electricity. Age 21 (born March 23, 1944). Nickname Heads. Hobbies include building amplifiers and assorted electrical equipment; skiing. Favorite drink is gin and tonic. Favorite artists include Buddy Holly and the Shadows. .Dislikes showy girls, conceit, bad jokes and phonies. Like to enjoy life and playing with the group. Ambition is to own a Jaguar and become an electronics technician.

For bookings and further information, the Rockatones can be reached at:
JOHNNY SEMENIUK
7275 l’Acadie Blvd.
Montreal 15, P.Q.
Or by contacting London Records.

Hello Robert:
I remember way back when I promised to update the information of The Rockatones. We were listed as a group from the Maritimes at the time.
We were actually from Montreal - what is know as the Park Extension area. All our recordings were done in Montreal.
I'm enclosing scans of all the records we recorded as well as three that were done as back-up to artists in the French market.
One photo, blurb from a 1966 record promotion and the discography will be included here. I'll ask one of our former band members in Toronto to send you a copy of the tracks on a CD or other format.
Should you require more detailed info just let me know.
Yes, we are all still alive and are looking forward to getting together in May of this year in Kelowna and playing once again FOR FUN.
Len lives in Kelowna, Brian in Toronto, Steve in Dorval, QC and John in Ste-Julienne, QC.
Let me know if all comes through correctly.
John Semeniuk

Shake Hands b/w Why Don't We Get Along (stereo) 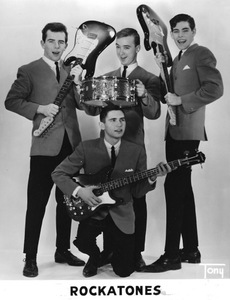 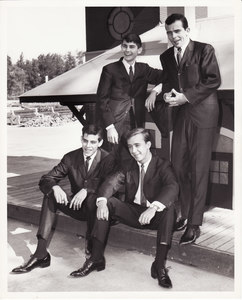 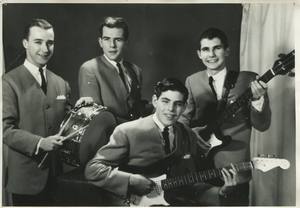 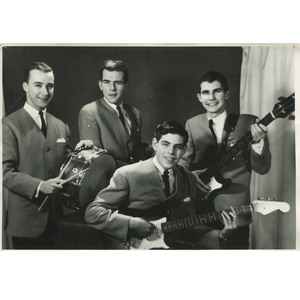