While their name remains known to few outside the rabid record collector cogniscenti world-wide, this legendary Alberta outfit came barrelling out of Edmonton in 1980 with just this one near-perfect record before imploding and disappearing for evermore....but what a record it was. Coming across like nothing so much as a super-charged version of the first Teenage Head LP, these punks amped up the energy and aggression without sacrificing an ounce of their inherent raw tunefulness and swagger. Legitimately one of the greatest Canadian punk/rock'n'roll records ever released, it is certainly the rarest, earliest, and most desirable punk single artifact out of Edmonton, Alberta and was limited to a print run of 500 numbered copies. All songs appeared on Frank Manley's Smash the State Vol 1. "Wild West" appeared on the single that came with the book. A lot of Frank Manley's great collection of rare Canadian punk singles ended up in the Canadian National Archives, hopefull not just collecting dust.

back in print for the first time in over thirty years by Ugly Pop Records on Ugly Pop 029, released in 2012. 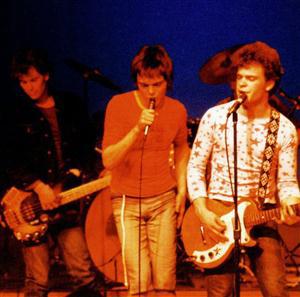