Born from a mutation of the Sinners, in the fall of 1968, Révolution Française will not take long to carve out a place for itself in the musical landscape of the end of the 1960s. François Guy, Louis Parizeau, Georges Marchand and Arthur Cossette combine first their destiny at the Canusa record label, already well established on the local scene by singer and producer Tony Roman. After a first 45 rpm and a participation in the "Réveillon chez la famille Canusa", the quartet launches a LP which shows a certain audacity. Indeed, a long sung monologue of 22 minutes occupies the entire B side of the album "C-Cool". These experiences are relatively commonplace at Canusa and its affiliate labels, A1 and Revolution. The albums "Expérience 9" (a reissue of Jean-Pierre Massiera's "Maledictus Sound" whose titles are Frenchified), the "Reels psychadéliques" (sic) I and II soon complete this ephemeral picture. But even in this age of experimentation, such initiatives do not guarantee massive success. The title track "C-Cool", launched on 45 rpm in an abbreviated version and coupled with "And the earth will turn", barely brings the quartet recognition in the artistic world.

It will be necessary to wait for the following summer and a new reshuffle within the musicians before the French Revolution can really shine. The trio, formed at that time by François Guy, Richard Tate of Mersey's and Angelo Finaldi, formerly of Trixie & the In-Mates, was then propelled to the top of the charts with the song "Québécois" which was immediately taken up in chorus in many many gatherings with an independentist flavor. The impact of the song even exceeded the intentions of its creators and for a time became the unofficial anthem of Quebecers. Moreover, an internationalist version entitled "Americas" in which we see the dawning of a certain utopian globalization on a continental scale, will know a very confidential distribution.

The trio will never really recover from this success which is carried by circumstances external to the group. Other personnel changes marked their next 45s, in 1970 and 1971: "Y mouille à sciaux", "Le temps de la Révolution", then a funky adaptation of "Au clair de la lune", etc. will go almost unnoticed. François Guy soon forms a new trio by the name of John, James and François in which we find Jay Boivin, one of the initial members of the Sinners. Richard Tate and Angelo Finaldi soon fly to Europe and team up with Johnny Hallyday for a while. Upon their return, Angelo collaborated on the albums of several artists including Nanette Workman while Richard got involved in various international projects. The three musicians of the glorious era of Révolution Française will eventually record solo albums.

Nine Till Five b/w Why

Dawn of the Revolution b/w I Do Believe in Magic 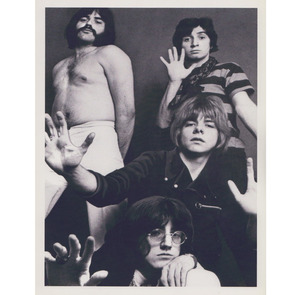