Robert Service immortalized the glamour and romance of the Klondike Gold Rush. His writings vividly recorded the hardships, lust and greed that prevailed among the horde of stampeders who swarmed into the Klondike Gold fields in 1898 - 1900. The names Yukon, Klondike and Dawson City became household words around the world. His writings make mention of a mysterious mental euphoria called the SPELL of the Yukon that was certain to invade ones mind and soul, and from which there was absolutely no known cure. Those that live in the Yukon, or those that linger too long under the Midnight Sun know exactly what Service meant by the SPELL. There is truly a SPELL that remains with you forever, and you find yourself returning from where ever you are to see if the Yukon is still as it was the last time you left. The Land is overloaded with a gift of glorious natural attraction exhibiting a majestic beauty that seems to be forever endless and overwhelming in its unique beauty and charm.

Al Oster is a music composer/song-writer/artist who arrived in the Yukon in 1957 and became an instant victim of the SPELL. He immediately recognized the history and legends of this land as a sleeping giant of wealth for heritage preservation and began writing musical ballads soon after arrival. He subsequently recorded several 45 RPM records to be followed by an LP called`YUKON GOLD'. By 1987 he had recorded and released 14 LP's in Canada,USA, Germany, and Belgium. In 1988 he filmed and released a 30 minute Music/Video documentary on the Klondike Gold Rush of 1898. The LP's and Music\Video include 60 of his original compositions, 40 of which are Yukon/Alaska ballads. He left the Yukon in 1975 but keeps coming back each year just to see "how it was and still is".

He was one of the first since Robert Service to write and publish poetry about Klondike Gold Rush folklore; and one of the first Canadians (1957 copyrights) to compose and sing folk music about historical Canadian folklore legends, and to preserve the compositions on LP Records. He subsequently attained national recognition for his musical works in 1968 by being the first Canadian composer to receive the BMI CANADA Certificate of Honour Achievement Award for an outstanding contribution to Canadian music in the country / folk music category. In 1993 he received the Yukon Heritage Award from the Yukon Historical and Museums Association for his contribution to the preservation of Yukon history; and in April, 1999 he was appointed a Member of the Order of Canada for his contribution to Canadian heritage. In 2002 he was again awarded recognition by Her Majesty Queen Elizabeth 11 for his musical contribution to Canada history. His folklore compositions are now preserved forever on LP records, CD's, cassettes, music/videos, sheet music, and song books.

"When I first started writing songs back in the early 1940's I dreamed of having a record playing on a juke box somewhere in a restaurant. I wrote several songs but didn't know how to go about putting them on a record. The first song I had published was called "After Tonight" and it was published by a USA publishing company after I sent the $25.00, and it was recorded by an African blues singer. They sent me a horrible 45 RPM record of the song, which I happily lost somewhere. No royalties were ever paid. Then I wrote several cowboy songs in Alberta while singing as "Calgary Slim" in Calgary. But I didn't know how to get them recorded. I knew how to get them into a publishing company, but since I never received any money from the publishing company for "After Tonight" I was somewhat concerned about letting any more songs go. I was warned about "song sharks", and that made me wary of signing any more publishing contracts, and giving money to them for the glory of having a signed contract in my hands.

Then came "The Yukon". I wrote several songs and went down to Vancouver to talk to the owner of a well established record company. He liked my songs but said they were too localized, being about the Yukon, and he might have difficulty in recovering his investment. There were two songs that he was very interested in, and he wanted me to be at a certain place the next morning for a recording session with Ray Griff playing organ accompaniment. I wasn't impressed with that kind of musical arrangement. I didn't show up.

I then went to Empire Music Publishing Company to see about them publishing some of my songs, because that's where Keray Regan was getting his published. The manager wanted all of the songs, so I agreed to sign over two which were "Next Boat" and "Midnight Sun Rock". While there I also picked up the Yukon agency representative for all "Fender musical instruments" and other wholesale musical items.

The I went and rounded up some old musician friends I knew in Vancouver being Walt's Frank, Bill Mallet, and a drummer, and I bought a good Tanberg tape recorder and microphone, and we went to Walt's home and recorded all the songs that were on my first LP album called "Yukon Gold". I took the original tape recordings from the Tandberg recorder and went to a recording studio on Broadway in Vancouver and converted the Tandberg recordings to a 15 IPS master recording, and I also bought the Berlant Concertone that I still have, and on which I recorded all my CBC radio shows in Whitehorse, and some of my later LP's.

I took the 15 IPS master back to Whitehorse and tried to figure out what to do with them. I asked the CBC radio station manager and he thought I should create my own independent recording label for a start and pay for the first pressing myself, and then if everything went well I should try to contact a record company. He suggested the LP be called "Yukon Gold" because of the song "Yukon Gold", which he considered to be an excellent song. He also advised me to contact BMI Canada Ltd to register my songs with, and then when a radio station played the songs I would get "performance royalties" for the play. So I gave it quite a bit of thought and talking it over with Mary, and we decided to call our recording company "Klondike Record Co".

I then had to find a place that would make records and so from the RPM music magazine publisher which I subscribed to I found several places in Toronto, one of which was Quality Records. I contacted them and was very lucky in making contact with someone in the firm that really helped me a lot. I placed an order with him for 1000 LP's in the name of Klondike Records, and we sold over 15,000 Yukon Gold LP's. Klondike Records also produced "Northland Ballads", "Alaska Star 49", and the "Alaska" double LP. We also formed "Alkon Records" in Oregon and Washington, USA to handle USA and Alaska sales.

Then after moving from Yukon to BC I changed the name of my recording company to "Frontier Records", because I planned to write songs about BC and Canada legends, and I thought the name Frontier would be more appropriate. That's why my recordings and CD's now have FRCD or FRLP as prelude letters to the CD production number, which is 02(year) and 07 (production number). Before they were preceded by KRLP-0000.
Northland Music Publishing Co.

Music publishing is a very complicated and difficult form of entity to zero in on. When I first got into the music business I knew absolutely nothing about it. I wrote a letter, which I still have, as well as the reply, to the Canadian Music Publishers Association asking information on how to form a publishing company, and their very brief reply was "We don't provide that information. We suggest you contact a lawyer". So I contacted BMI Canada and they sent me the application forms to join their organization as Northland Music and then I would receive the "publisher" royalty as well as the "writer" royalties from them, and I could also sign up other artists in my publishing company, and get a percentage of their royalties as well. I had joined BMI after writing "Midnight Sun Rock" and "Next Boat", and have been a continuing member since around 1958.

And so Northland Music was born in 1960, and it controls the royalties for all of my songs except for the two assigned to Empire Music. As well it manages the copyrights of works by several other writers and performers.

I could write on and on about the learning problems with publishing and recording contracts, and copyrights. I never saw a lawyer about copyrights. I learned how to do it myself, both USA and Canada. I bought books on music publishing, and sent for the Copyright Act of Canada and the USA and read it several times to make sure everything was right. Pretty dry reading I'll tell you."
-Al Oster

Echo of the Yukon 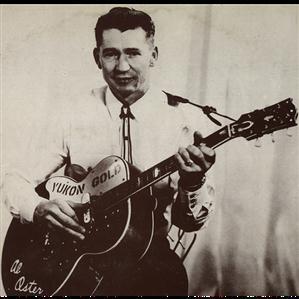