Long time ago there was a band called "The Orphans" comprised of Steve McGovern (guitar), Ron Boisvenue (drums), "Dizzy Fingers" Richards (bass) and "Spaceman" Paul ?? (keyboards) who played during the same time as The Pumps at the same venues. Steve & Ron joined Chris Burke-Gaffney and Brent Diamond to form a new version of "The Pumps" which then changed their name to "Orphan". After the recording of their first album, "Lonely at Night" in 1983, Ron died of cancer, and Terry Norman Taylor rejoined the band.

"Lonely at Night" established strong radio play and a retail base in both Canada and the United States. The album came very close to reaching gold status as well. At that time with the rise of MTV and Canada's Much Music, Orphan had videos for Lonely At Night and Miracle. Miracle charted Top 10 in Canada and is still a mainstay on Classic radio.

"Salute" came out in 1985 and the band landed a national tour with Platinum Blonde.
A video was released for Open Up The Skies.

Today many Canadian Classic Rock Radio Stations have been playing Lonely At Night, Miracle, and Open up The Skies. 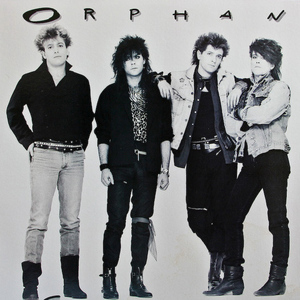