The Original Caste was started as the "North Country Singers" in 1966. They changed their name to "The Original Caste" in 1969. It was a group of five people with the married couple of Bruce and Dixee Lee Innes .

At first, they released two singles through DOT records, but made little success. In 1969,They made contract with T.A of the Bell Record . The single "One Tin Soldier" and the album of same title were released.

These were produced by Dennis Lambert and Brian Potter who became the leaders of the latter Dunhill Records. The group leader, Bruce composed several songs in this album. The excellent pop tunes were fully loaded to this album.

Title song "One Tin Soldier "is more popular in U.S.A. (No.34/Billboard Chart) than the next single "Mr. Monday" which became 460,000 copies selling mega hit in Japan (Gold Disk). Many cover records of "One Tin Soldier" have been issued by now. Especially, The Coven makes this tune appear to the US charts four times and it was used for the Original Sound Track of the Warner's Movie named "Billy Jack" . The person in charge's of this O.S.T. wanted to use the original version of The Original Caste , but the episode that The Coven of The Warner Record was in haste chosen because of the movie and record company's relation remains.

"One Tin Soldier" and "Mr.Monday" both tunes became NO.1 hits in Canada of their home country. They came to Japan twice, and two live albums were released, and participated in the Tokyo World Music Festival, and totally six singles were released in Japan and made great success. Afterwards, the solo album of Dixee was issued from the Bell Record, and the Greatest Hit Album was released only in Japan.

Now, Bruce says "We have many wonderful memories of Japan".

The music act of Bruce and Dixie is continuously for about eight years and the album "Back Home" was left after their original member's group were dissolved in1972 through the opposition with the Bell Records where a further pop taste is compelled to them. Their music taste was towards simple human songs.

Bruce and Dixie divorced in 1980. Now, Bruce are married to Wanda living in Idaho State, and keeps music act beside the work of CM Production . He is playing his inspired folk music in local concerts.

When Love is Near b/w Sault Ste. Marie 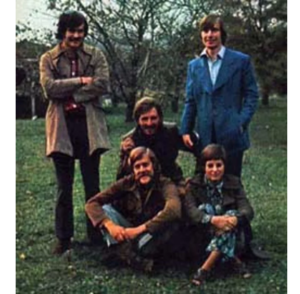