The Organ was an all female Vancouver quintet. Formed in 2001, this ensemble gained rapid exposure with the release of their first EP, Sinking Hearts, helped by a live show that spirited them on stage with some of the most significant bands of the day. A critical and popular favourite, The Organ wrote melodic and introspective music based on layered interplay between their instrumentalists -- Debora Cohen, guitar; Ashley Webber, bass; Shelby Stocks, drums; Jenny Smyth, Hammond organ -- and the intimate and doleful lyrics of their lead singer, Katie Sketch.

The Organ's sound has been commented on and debated over from the very beginning. The band was consistently compared with the best songwriters of the early '80s new-wave, having written structured songs around minimal arrangements, and created a nuanced, textured sound that could be brooding and catchy at the same time. Whether it is the weaving counterpoint melodies between organ and bass, the lean, bell-like intonation of sparkling guitars, the charmed tenacity of the snare, or the suspended lamentation of Sketch's cascading vocals, much excitement was borne out of the desire to name The Organ's sound in precise terms. For their own part, the band accepted the associations with an amused detachment. "Originally I was trying to do something a little more rock, like Elastica," said Sketch, "but obviously it didn't work out that way."

The Organ played with a wide variety of contemporary bands such as Interpol, Hot Hot Heat, The Walkmen, The Von Bondies, The Soledad Brothers, and Bratmobile; and toured across North America with The New Pornographers. The band became well known for the somber intensity of their live performances, which they happily acknowledged as involving very little physical movement on stage. "That's the only way we can be," said Sketch. "If I paid Debora a million dollars to jump up and down, she wouldn't. That's just her personality."

Perhaps it was a testament to the saliency of Sketch's dark lyrical themes, which ranged from interpersonal relationships to politics, that The Organ was so often perceived as a wholly melancholy affair. Organist Jenny Smyth was herself caught between the band's music and its rueful subject matter: "The Organ's music sounds really happy and cheerful so I always get really shocked when people say 'your music is so sad and emotional' and I'm like *really*!? I think it sounds like *la* *la* *la*..."

With so much attention already devoted to The Organ's sound and presentation, there remains nevertheless a lasting captivation with their distinction as an all female band. "Other people tend to point it out," mused Smyth, "'Oh, an all girl band!' and I'm like, 'I'm a girl?' I'm just playing with my friends," says Sketch. "We wouldn't have cared if we'd found some really great boys to play with us, but instead we found some really great girls."

Still, the distinction was not without significance, as drummer Shelby Stocks knew first-hand. Her seventh grade band teacher took her drumsticks away and gave them to a boy, informing her that girls don't play the drums. "There was a part of me that wanted to prove him wrong -- that girls can actually play. What an idiot."

Much to the devastation of the entire concept of music, the band broke up in 2006. However, they agreed to come together on amicable terms in 2007 to record what material they had already written for the follow up to Grab The Gun. In October of 2008, Mint released the band's swan song... er, swan EP. The six tracks on Thieves reminded fans and critics alike precisely what a gift The Organ was.

"The Organ does it so well, it's hard to believe these kids are in their early 20s." - John Parish, The Big Takeover

We've Got to Meet b/w It's Time to Go 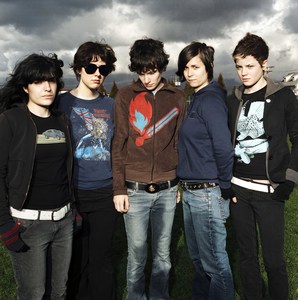