There seems to be a lot of confusion as to what Tunnel Canary was really about. Right from the beginning there was a lot of resistance and negative criticism from punks as well as outsiders. There was also some passionate appreciation.

Tunnel Canary formed in 1978/79, after Nathan (a.k.a. Aleh Kaheen) left the original line-up of [e?] which was a much different and more experimental band in its early form (see SnotRag #13) than it's later versions. Original members of [e?] were Gary Bourgeois (lead guitar), Michael (bass), Brock (drums), and Aleh (guitar and synthesizer); later Gina (Gary's wife) joined. In [e?] vocals were originally done by everyone, individually and collectively. Incidentally, the music presented on the first Vancouver punk compilation album as [e?] was not the group's music, but Gary Bourgeois's solo effort which he put out without the rest of the band's permission, and that's another story in itself.

Anyway, Aleh (now Nathan Holiday) went on to form Tunnel Canary which was formed to be a hard hitting, anarchist, improvised, electro-punk band. I did not want the band to be a copycat of the three-chord British punk bands (Sex pistols, Clash, Buzzcocks, etc.) although I was influenced a great deal by these bands. I wanted to take things much further than leather jackets and spiked hair cuts. I realized many of the punks, apart from their hair-do's and the leather, safety pins, etc., were doing all the same things that their parents were doing: getting drunk, smoking tobacco, and eating shit food. I wanted to take the best parts of the punk attitude (e.g. the anger, the spontaneity and their exuberance) and extend it by adding vegetarianism, buddhism/theosophy, yoga (no alcohol, no tobacco, and a more sophisticated left wing political viewpoint).

Tunnel Canary used cheap and customized electronic technology, extreme fashion and gesture, creative imagery, and radical music improvisation (no rules, no mercy) to help to get the aforementioned ideas across. Because we (the core of the band) didn't hang out in the pubs, bars, or punk parties often, people really didn't know who we were, or what we were really about. So, when we were compared to DOA, the Subhumans, Young Canadians, or Modernettes, the punks and others called us a "fuck" band, a "noise" band, an "art school" band, or a "fag" band. These names seem to be a rather impotent way to "dis" our seriousness and radical approach to the punk attitude. If "fuck" band means "Fuck You Establishment", I'll accept it. If "noise" band means the creative use of sound to wake people up, including the punks, I'll accept that too; if "art band" means that art can be transformative and spitting-in-your-face powerful, I'll accept that too. But "fag" band is a bit of a problem. I first found this description of us on the internet a few years back. While none of the core band were "fags", a number of supporting players and some of our friends were bisexual, homosexual, or experimenting one way or the other with their sexuality at that time. We did try and bring an anti-sexist and androgenous energy to all of our performances. The word androgenous in it's truest sense means every individual has both female and male energy within his or her own body -- this in its most sophisticated sense goes beyond conditioned sexuality. So to describe us as a "fag" band -- gimme a break! That's as lame as Phil Smith's description of us in Slash (magazine) as Yoko Ono wannabes. Some better descriptions of us might be as "Techno-Anarchist-Slackers", "Acid Punks", and a better description of the music might be "Punk Opera" or "No Wave Surf Music".

I first got the idea for the style of the vocals at an early Vancouver punk gig when a bunch of punk girls were fooling around with a stage mic between sets. One of them (it may have been Mary Jo, bass player for the Modernettes) let out a loud scream. I thought this was the most interesting and powerful event of the evening. Too bad, I thought, that it couldn't have gone on longer. I was thinking of Alfred Hitchcock's horror movies, eg. The Birds, Psycho, Whatever Happened To Baby Jane, etc.

I decided to experiment with this idea and asked Ebra (then my girlfriend) if she could scream for an extended period of time. She tried and was incredible. A screaming, angry female (Earth Mother taking her revenge) voice over radical, improvised electronic sounds -- thus Tunnel Canary was born.

The name itself came from a natural foods jam and pickle co-op that had gone out of business. The story I heard was that the label had originally meant to read "Tunnel Cannery", but the printer made a mistake and the label had come out as Tunnel Canary. I had also read about canaries being used in Britain as explorative "guinea pigs" or "scouts" lowered into the coal mines to check for deadly gases. The imagery seemed to fit: delicate creatures being lowered in cages into darkness -- a sort of black, brutal, pioneering, avante garde -- light at the end of a tunnel (cave) -- little courageous birds sticking their necks out (no choice) and at best coming up as survivors, singing. Also, Tweety and Sylvester came to mind, especially one image when Tweety whacks Sylvester and knocks him out (David and Goliath).

The first performances were done on the street (influenced by seeing pictures of Laurie Anderson's early street performances). These first performances took place near Georgia and Granville where the Film Festival ticket booth is usually now set up. These early performances consisted of only Ebra (no mic) and Aleh (Nathan Holiday) with a cheap, Japanese electric guitar, distortion plus effects unit, and a pig-nose amp.

I can't remember exactly how many performances we did (perhaps 6-9). These performances drew crowds of approximately 100-250, with the police at times breaking the performances up and threatening to confiscate my guitar and amp. I remember a funny incident at one of the first performances where two policeman thought Ebra was either deranged or having a seizure and approached her very cautiously, they were terrified, you could see it in their faces. The police didn't realize we were together. When they finally asked her what was wrong, and to calm down, she told them that she was singing. They got very mad and told us to get the hell out of here and don't come back. At later street performances so many people blocked the sidewalks and the street that the police couldn't get through the crowd in time to catch us and we would run the other way to escape.

The first full band gig using the name Tunnel Canary was June 9th, 1979 at the New Orchestra Workshop space. Also performing were AKA. Tunnel Canary had 6 or 7 musicians playing and improvising together, including Tommy Wong on keyboards, Daryl Clyde on second lead guitar, Ebra and Nathan, Randy Pandora doing some backup vocals, and probably some of AKA and [e?]'s players. To tell you the truth, I can't remember all the names or faces.

From this point on, a number of people came and went after a performance or two. D. Clyde, Tommy Wong, Michelle (drums), Chris Able (drums), Johnny (guitar), Colin (guitar), Alex Varty (guitar), Randy Pandora (vocals). During this period some performances sucked, and others were at best okay (in my opinion). Many players from some of the other punk bands expressed an interest in playing with us. We experimented with drummers but couldn't ever find a line-up that really worked. By 1981 the final lineup was Aleh Kaheen (Nathan Holiday) on guitar, synthesizer, and electronics, Ebra on vocals, and David Sheftel on bass, electronics.

Most of the performances we did were free, or benefits, eg. "Rock Against Prisons", "Rock Against Reagan", "Rock Against Nukes", benefits for squatters, etc. We were billed to play with Black Flag and Minimal Man but due to border hassles they were not let into the country. Ebra and Aleh also played the Mondo Art Cabaret at the Commodore Ballroom as "Double Information" and performed on K.A.O.S. TV. Tunnel Canary also played some early gigs at the Smilin' Buddha (the first one was great, they pulled the plug after about 5 mins). They also played at numerous art spaces and galleries. I also did a solo gig at the Western Front's First Annual Electronic Musical Festival as Tunnel Canary's guitarist. Tunnel Canary's best live performance was the "Rock Against Reagan" gig with the Subhumans. The worst (it should have been our best) Tunnel Canary's performance was the William Burroughs concert where the sound system failed and I walked off the stage.

It seems over time that our small contribution to the city's alternative rock history has been somewhat forgotten and ignored. In retrospect, I think we should have definitely been included on the first Vancouver Complication album, or at least its reissue. I'm not sure why we were not, perhaps because people thought we had no recorded material available. In terms of the band's historical position we were a branch off of The Rest - Generators - [e?] lineage. And then, branching off from Tunnel Canary, were No Neck Shadow, and Guitar Weirdos.

A number of people have thought that TC have had a rather substantial influence on a number of our peers and successors, including such bands as Skinny Puppy and Mecca Normal. I cannot say for sure that this is true. 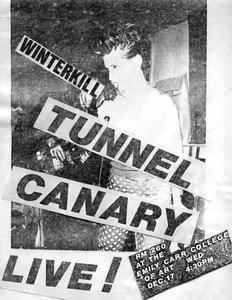