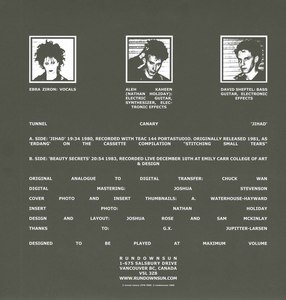 Tunnel Canary was first active in the Pacific Northwest from 1978 to about 1984.

Aleh (Nathan Holiday) would play his guitar with a saw. More throttling than cutting, the guitar strings would be strangled by the teeth of the saw blade. Meanwhile, Ebra Ziron would scream, and I mean you just couldn't believe such a HUGE voice could ever come out of such a little person! Ebra wouldn't be able to talk for days after a show. It was punky female squealing over proto-power-electronics.

In a historical context, the onset of Tunnel Canary is very interesting because it’s a perfect foreshadowing of the progression that would later take place from the end of what was the industrial scene in the early 80’s to the beginning of what would later become the noise scene in the late 80’s.

Although there has been a resurgence of this style during the double-zero decade, power electronics was originally that transitional period from extreme industrial to pure noise during the 1980’s.

The transition I’m talking about is the natural evolution towards a greater and greater distortion of sound. The idea that distortion illustrates transformation has become central for many pioneering noisicians. When distortion becomes a fetish for sound, noise is the result. This is because sound is transformed into noise by distortion.

At the time Tunnel Canary was never thought of as being part of either the industrial or noise scene. They were often referred to as No Wave. But unlike any other act that might have had that same label, the sound of Tunnel Canary was far more abstractly and absurdly structured. Tunnel Canary simply pushed things much further than any other punk act at the time. They weren’t just complex. They weren’t just subversive. The energy of their sound was as excessive as their performances were brief. It was like receiving concise punches to the head from within your own brain. Always dazed afterwards, you never felt the same having had experienced them.

Their first performances were daytime hit and run attacks on the sidewalks of busy downtown streets. Think prolonged tantric chanting condensed down to a concise detonation. It was Ebra without a mic and Aleh with some cheap electric guitar and pig-nose amp. These street performances drew spontaneous crowds of hundreds. Often people would think Ebra was actually having a seizure of some kind. So many people would be blocking the street that the authorities wouldn’t be able to get through in time to catch Tunnel Canary before they ran off in the opposite direction to make their escape.

Their subsequent shows, with David Sheftel as the third canary, were longer but no less sonically outrageous. A Tunnel Canary show had layer after layer of racket fragments bouncing somewhere between the back of your teeth and your inner ear. They were the classical complaint against calm, and the archetypal battle against boredom. They made you realize there was more to punk than just safety pins and leather.

I remember seeing them open up for a William Burroughs reading in 1981. They blew the PA in seconds! Nathan I know doesn’t care much for that one, but I remember Burroughs telling me how he loved it. We all loved it.

Tunnel Canary was a wake-up call for those of us fortunate enough to catch them live in those early days. When we heard them we heard the future, and the future was going to be loud!
-GX Jupitter-Larsen, 2007

Described by its founder, Nathan Holiday, as “punk opera” by “techno-anarchist slackers”, Tunnel Canary was an uncompromising experimental project whose role in Vancouver’s early punk scene has been largely overlooked.

Filmmaker Eric Lohrenz intends to change this with his documentary Tunnel Canary 1978–2008, screening at the Sweatshop (1943 East Hastings Street) on Saturday (July 19), complete with performances by a reconstituted Tunnel Canary and guests the Mutators and Flatgrey.

The gig also marks the release of a retrospective of the band’s material called Jihad on the local Rundownsun label. The film screens again at Blim (197 East 17th Avenue) next Friday (July 25), with a solo performance by Holiday.

Lohrenz told the Straight that a chance meeting with Holiday sparked his interest. “We had a conversation about this punk band he was in from the late ’70s, and since I’d never heard of it, I figured it must be nothing great.” Lohrenz checked out some samples on the Punk History Canada Web site. “I listened to it and I was, like, ‘Whoa, okay, now I’m interested.’ It just blew my mind.”

The documentary is largely assembled from Holiday’s stash of memorabilia. For the Sweatshop performance, Holiday and original bassist David Sheftel will be joined by Mya Mayhem of locals Life Against Death, who replaces “screamer” Ebra Ziron.
-Adrian Mack, July 17, 2008